“This day a respectable man named Hanumanta Bhat (Yadavendra, after becoming a sanyasi), son of Taman Bhat, son of Narayana Bhat, declared in the administrative office of Mohammadabad alias Banaras”.

This refers to a building constructed on a plot measuring 17yd x 15yd and surrounded on the four sides as shown in Fig6. The plot and the structures (the location is the same as that described in document no. 9) where in the possession of Keshava Thirtha (alias Rama Bhat), son of Narayana Bhat. While he was alive (he passed away in 1670), Keshava Thirtha had donated the whole plot along with the structures thereon to Yadavendra (alias Hanumanta), who was in the possession of the plot, the structures as well as the relevant document (Document no. 9 described earlier is the donation deed referred to here), which was then produced before the Kazis, who read it and confirmed the contents thereof. 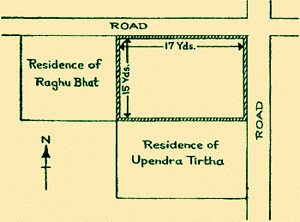 Yadavendra (II) Thirtha then went on declaring that he was on that day (5th January, 1671) donating the plot with the structures thereon to his brother’s son Narayana Bhat (later Raghavendra Thirtha).

Narayana Bhat accepted this donation in the presence of the Kazis and took possession of the relevant documents. The document goes on to describe Yadavendra (II) Thirtha as having a wheat complexion. This tall person with wide brows and wide eyes had a scar on the forehead and black moustaches and beard. His age (in 1671) was 42 years (giving the year of his birth as 1629) 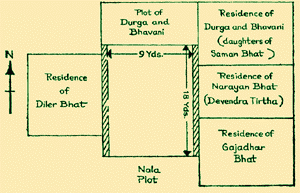 Another document (No. J 7) gives the inter-relations of some Swamijis of Shree Kashi Math Samsthan as shown in Fig. 8. 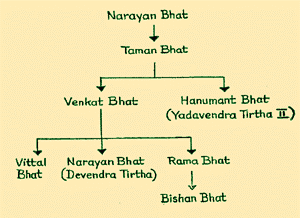 Fig. 8: Inter-relationship between some Swamijis of Shree Kashi Math Samsthan (Document No. 17)

This is dated 4th Zilkaz, 1126 A.H. (Sunday 31st October, 1714) three years after passing away of Shrimath Yadavendra (II) Thirtha . His brother’s (Venkat Bhat’s) three sons, Vittala, Narayana (he had already become Devendra Thirtha by then) and Rama claimed that they were the successors of Yadavendra (II) Thirtha in the court of Mohammadabad alias Banaras. Two witnesses of the Brahma Ghat, Banaras (one Madhava Bhat, son of Bhima Bhat, son of Rama Bhat and another Rama Bhat, son of Narayana Bhat, son of Bhima Bhat, both being Maratha Brahmanas) are mentioned in the document.

Document No. 28 deals with the donation of the plot purchased by Yadavendra (II) Thirtha in 1674 and covered in Document Nos. 3 and 15 after his death to his nephew Bishan Bhat (son of Rama Bhat) by his brothers and is dated 27th Safar, 1127 A.H. corresponding to Monday 21st Feb., 1715. This was filed by Hanumanta Bhat’s (Yadavendra (II) Thirtha’s) nephews (Vittala Bhat, Narayana Bhat alias Devendra Thirtha and Rama Bhat, sons of Venkata Bhat) in the Banaras court (Jafar Mohammad Kasim).

After describing the plot and the structures thereon (almost the same as those described in Document No.3) the nephews declared that their uncle (Yadavendra (II) Thirtha) had passed away and that they had jointly inherited his said property and produced the relevant records in the Court. They further declared that they were jointly donating the entire property to Bishan Bhat, son of Rama Bhat (one of the donors). Subsequently, Bishan Bhat took possession of the relevant records and admitted in the court that he did so. The donors pledged that they would not raise any objections in the future regarding this donation.

Shrimath Yadavendra (II) Thirtha, the fourth in the Guru Parampara of Shree Kashi Math Samsthan did not initiate anyone into sanyas. In the later years of his life, he visited the Karnataka region and camped in Hemmady, where he attained Maha Samadhi on Bhadrapada Shuddha Purnima of Khara Samvatsara, Sh. Sh. 1633, corresponding to Saturday, 15th September 1711 A.D.* He had lived to a ripe old age of 82 years. The Vrindavan of H.H Shri Swamiji is in Hemmady Shri Kashi Math ,near the river Chakra.