Shrimath Keshavendra Thirtha Swamiji was initiated into Sanyasa by His Guru H.H Shrimath Yadavendra Thirtha Swamiji. H.H Shrimath Keshavendra Thirtha Swamiji became the second Mathdhipati of Shree Kashi Math Samsthan after His Guru, the first Mathdhipati attained Mahasamadhi in the year 1608 A.D. He founded the Math building at Basrur in Kundapura taluk. Another building at Hemmadi in the same taluk was built by the followers of Shree Samsthan, the residents of Hemmady, who donated the same to H.H Shri Swamiji. He travelled widely and bought some land in Kashi, adjacent to the existing Math premises with the intention of expansion in the future.

The following details obtained from certain court documents (which the author had the good fortune of going through) cover hitherto unknown or little known facts about the second to the seventh Swamijis of Shree Kashi Math Samsthan. These are twenty-two documents in the form of sale deeds, affidavits etc. filed in Muslim Courts of Mohammadabad (the name by which Kashi was known in official circles) and court declarations. These were in the Persian language, and were subsequently translated into Kannada (the present author has with him copies of the Kannada versions of all these twenty two documents obtained from H.H Shrimath Sudhindra Thirtha Swamiji). These bring to light some of the hitherto unknown facts of Shree Kashi Math Samsthan and some of the earlier Swamijis of Shree Samsthan. Some of these are found very useful in deciding some of the controversial matters and misconceptions regarding the history of the Shree Samsthan. An attempt is made here to clear these misconceptions with the help of these documents.

Firstly, let us consider Document No.9. This is dated 4th Shavval 1078 A.H.* (corresponding to Sunday, 8th March, 1668) and issued under the seals of Kazi Sayyad Inayatulla and Kazi Sheikh Vaviyulla, Daroga Dost Baig and Mufti Sheikh Dost Mohammed and Sheikh Ambilo. It relates to a declaration given by a respectable person, Rama Bhat, son of Narayana Bhat and renamed as Keshava Thirtha after becoming a sanyasi, in the administrative office in Banaras, regarding a plot of land with a building on it. This building had three halls in the north, west and south and a separate W. e. on the plot and all these were covered with wooden planks at the ceiling. There was also a vacant space in the plot, which measured 17 yards (eastwest) x 15 yards (north-south) and was situated in the Brahma Ghat in Banaras. The four boundaries of the plot are shown below in Fig. 2. The shaded portions are the walls erected by Shrimath Keshava Thirtha. 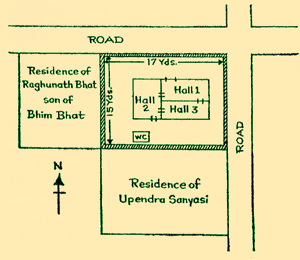 The declaration goes on to state that the said plot was in the possession of one Smt. Shanvai, wife of Ananta Bhat and that Shrimath Keshava Thirtha bought it from her for Rs.600 (Rupees six hundred only). The sale deed, with the seal of the Kazi Sadulla, was in the custody of Shrimath Keshava Thirtha. However, it got destroyed due to rain water falling on the place where it was kept. After some days Shrimath Keshava Thirtha demolished the old building and constructed a new building with wooden ceiling on the eastern side. Halls were built with tiled roof on the east, south, north and west. There was even an underground room below the western hall. A separate W.C. was constructed near the southern boundary of the plot. He was the sale owner of the plot and the buildings.

Two witnesses (Ganesh Bhat, son of Dilare Bhat, son of Narasing Bhat, and Bavan Bhat, son of Ananta Bhat, son of Amarish Bhat) testified to the fact that Shrimath Keshava Thirtha had purchased the said plot from the said woman and that he had constructed the said buildings on the plot after demolishing the earlier ones.

The said Bavan Bhat further testified that his name was shown as a witness on the said sale deed. Subsequently, Shrimath Keshava Thirtha declared that he is legally donating the said plot along with the structures standing thereof, without expecting any money to his chela (shishya) Yadavendra, son of Taman Bhat, son of Narayana Bhat. The said Yadavendra took possession of the same. Yadavendra who was also present in the assembly of worthy people declared that he’ took possession of the said plot with buildings and the concerned records. Shrimath Keshava Thirtha has been described as one with wheat complexion, wide forehead, wide eyes and brows, high nose, having a small and a big black mole on the centre of the nose, a big black mole on the right side of the head, another black mole on the left side of the nose and a fourth one on the right chin. Both of his ears have been punched (to wear ear rings). He has a tall figure and his age is given as 85 years (The year of his birth works out to be 1583).

It may be mentioned that this Yadavendra was different from Yadavendra, the first Swamiji of Shree Kashi Math Samsthan and Shrimath Keshava Thirtha’s Guru Swamiji. Yadavendra mentioned in the above document may be called Yadavendra II. The other name mentioned, Upendra sanyasi is the same as Shrimath Upendra Thirtha. Thus Shrimath Keshava Thirtha (Keshavendra Thirtha) had two shishyas, both of whom had two plots adjacent to each other. After donating the Math premises to Shrimath Yadavendra Thirtha (II), the Guru ­Swami left for Basrur, where he camped till his end, which occurred on Sunday, 27th February, 1670 at the age of 87 years (Phalguna Bahula Triteeya of Saumya Samvatsara, Sh. Sh. 1591). His Vrindavan is in the premises of Basrur Shri Kashi Math.