Shrimath Yadavendra Thirtha Swamiji was the first Mathadhipathi of Shree Kashi Math Samsthan. The Math Bhavan had been built by the Goud Saraswath Brahmanas around A.D. 1540. While H.H Shri Swamiji was touring Bhatkal, one Jog Mallya, son of Ananta Mallya of Bhatkal, donated a temple to Shree Kashi Math Samsthan in 1606. A document known as “Jogan Mallya’s Deed” is in the Math records. A free rendering of the same is given below:

on Monday Vaishakha Shuddha Purnima of Prabhava Samvatsara of Sh. Sh. 1528 (corresponding to 12th May 1606) I solemnly donate to you Tirumala Vishnu Temple built by me, the temple bordering the Kamakshi Temple in the east (built by my father, Ananta Mallya in the olden days, the temple which later came into my possession), a wall erected by me in the south, two big roads in the west and north, along with the Utsava (procession) idol of Tirumala God and the articles of puja, 1 am also donating the landed property to you for the maintenance of the temple and performance of various pujas and samaradhanas (mass feasts) mentioned as under: Amrit Padi to Tirumala God – Hari Jagara of Kartika month, the great procession on Uttana Dvadashi, Vanabhojana of Kartika Purnima, Jagara of Ekadashi. Naga Purana Vachana in Kartika, Vaishakha and other months and naivedya in the mornings in the month of Dhanu (the rice required for these individual items are separately mentioned; the total quantity of rice amounts to 131/2 muras). Please continue to perform the Krishnarpana duty during the various Utsavas in the temple. Do get the pujas performed in the temple. Whenever you will be in pilgrimage to other places, you will authorise Brahmanas of our caste and of my choice to perform the pujas. The renovation of this temple in the future, whenever necessary, will be done by you. The trusteeship of this temple shall rest with the local people including us. Your heirs as well as mine shall act according to this deed regarding all the matters of the temple.

This act of donation has been witnessed by Lakbal Prabhu, son of Narayana Prabhu and Lakaras Kamath, son of Lakaras Kamath. Signed by the donor, donee and witnesses.

(This was written by Kamayya, son of Ravalappa Shanbhag). The plot is shown in Fig. 1. 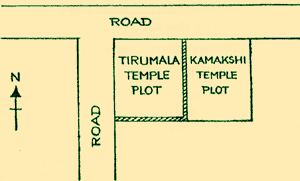 Shrimath Yadavendra Thirtha camped in Bhatkal till his end, which occurred on Wednesday 22nd June 1608 (Ashadha Bahula Panchami of Keelaka Samvatsara Sh. Sh. 1530) at a ripe old age of about 80-90 years. Earlier, he had initiated a vatu and named him Shrimath Keshavendra Thirtha and accepted him as his Patta Shishya (Successor).

According to a custom followed in Shree Samsthan a Swamiji initiates a worthy vatu into sanyasa and accepts him as His Shishya-Swami. After the Guru-Swami passes away, the Shishya Swami assumes control over the Math and looks after the affairs of the Math. Meanwhile, the mortal remains of the departed Guru-Swami are buried in the earth after suitably embalming the body with preservatives – salt, camphor, heaps of Tulsi leaves etc. – usually in the Math premises or in temples associated with the Math. Subsequently, a memorial structure is constructed over the site and an idol of Lord Hanuman is installed. A sacred Tulsi plant is then planted in front of the idol, the underlying principle being that the soul of the departed Swami reaches Lord Hari (supposed to have his divine presence near a Tulsi plant), through Mukhya Prana (Hanuman). The entire place is known as the Vrindavan or Samadhi of H.H Shri Swamiji. Arrangements are made for the daily pujas in the Vrindavan and the Punyatithi Aradhana (death anniversary) of H.H Shri Swamiji is duly celebrated with special pujas and prayers and Abhisheka to the Hanuman idol for His blessing to Shree Samsthan and its followers. The Vrindavan of Shrimath Yadavendra Thirtha is in Bhatkal.

According to the traditions of the Shree Samsthan, H.H Shri Swamiji (Mathadhipati) is a Brahmachari (observing celibacy) and leads a life of renunciation and follows all the rules and regulations of life, food and daily routine prescribed by usage and custom. H.H is conversant with the Vedas, Puranas, Shastras and the customs and usages to be followed by His followers.

H.H Shri Swamijis of the Shree Samsthan have their own Aradhyadevata, whom Sri Swamiji worship thrice daily with all devotion and ceremonies and in accordance with the Agama Shashtra. Shri Vedavyasa Raghupati Narasimha are the Presiding Deities of the Shree Samsthan since its inception. H.H Swamiji takes these idols along with all paraphernalia with him whenever and wherever He camps. There H.H keeps the idols in a separate room, decorates them with flowers and worships them with all adoration. A large number of followers witness the puja and after the arathi, receive benedictions from H.H Shri Swamiji.

H.H Shri Swamiji is also reverentially called upon to instal idols of Gods with due religious ceremonies in new temples built by the followers or is requested to reinstall (Punarpratistha) the images in old temples after renovating them.