Shrimath Raghavendra Thirtha, the shishya of the third Guru of Shree Kashi Math Samsthan, Shrimath Upendra Thirtha, became the fifth Swamiji of Shree Samsthan. He had founded Shri Lakshmi Narasimha temple in the Math premises in Banaras. Legend has it that as per the custom, the Swamiji was once bathing in the Pancha Ganga in Banaras along with the idol of Veda Vyasa. That night he had a dream, in which Lord Narasimha also expressed a desire of such a bathing (like Veda Vyasa) in the Pancha Ganga. The Swamiji got up early in the next morning and entered the Pancha Ganga along with the idol of Lord Narasimha. Now it was the turn of the Swamiji to express his desire and he prayed God to favour him with his Darshana, while he was awake. And the Lord did favour him with his Darshana on one Narasimha Chaturdashi while the Swamiji was performing the evening puja of Lord Narasimha. The Swamiji expressed his gratitude.

The Swamiji was a great tapasvi (the Darshana he had of Lord Narasimha was itself a great proof of this). In addition, he had achieved vak siddhi (whatever he said used to happen as he predicted). It is reported that many sick people were cured by the Thirtha (sacred water) the Swamiji had given.

The Swamiji was connected with the temples of Goud Sarasvata Brahmanas. Particularly, he had obtained that the pujas to be conducted at Shrimath Ananteshwara Temple in Manjeshwara shall be according to Pancharatragama.

He had initiated one Narayana Bhat into sanyasa, called him Shrimath Devendra Thirtha and accepted him as his Shishya- Swamiji. Narayana Bhat was the nephew of Shrimath Yadavendra (II) Thirtha .

He had also visited the famous Kochi Tirumala Devaswom, which was simultaneously visited by Shrimath Yogindra Thirtha of Shri Kumbhakonam Math. Unfortunately, a difference of opinion arose between the two Swamijis. This was carried too far with the ultimate result of breaking up of the ties between the two Math Samsthans. It is reported (History of Dakshinatya Saraswats by V. N. Kudva, p. 196) that when Yogindra Thirtha came to Kochi, he was received by Raghavendra Thirtha with a garland. The former, who was infuriated at the assumption of the name of his famous Guru (Raghavendra Swami of Mantralaya) by the latter, thrust off the garland with his danda, when Raghavendra Thirtha was about to garland him. As a result of this insult, he was not allowed to enter the temple by the followers of Kashi Math Samsthan. This led to litigation between them about the spiritual authority over the Goud Sarasvata Brahmanas of Kochi and it was eventually decided in favour of Shree Kashi Math Samsthan. Since then, there has been no interdining between the followers of these two Math Samsthans.

It should be remembered that before the foundation of Shri Kumbhakonam Math the Vaishnava Goud Sarasvata Brahmana community was affiliated to Shri Uttaradi Math. Now that the ties between Shree Kashi Math Samsthan and Shri Kumbhakonam Math were snapped, fresh relations between Shree Kashi Math Samsthan and Sri Uttaradi Math began to develop.

In an article Konkani Brahmanas – Their role in economic, political, administrative, religious etc. in Kerala history, Shri N.P.Mallya (published in Deeksha Smritimalika, Mulki, 1969, pp. 10-20) has referred to a recently discovered copper plate (one plate broken into two parts, written in Kannada through Devanagari script) preserved in the State Archives, Ernakulam. (A photostat copy of the same was published in the same article). This refers to the recognition granted to Shrimath Raghavendra Thirtha of Shree Kashi Math Samsthan by Shrimath Satyadhisha Thirtha of Shri Uttaradi Math as his equal and also the permission given to him to use all the paraphernalia used in Shri Uttaradi Math. The inscriptions in the copper plate bear the date Kartika Bahula Panchami of Durmati Samvatsara Sh. Sh. 1603, corresponding to Sunday, 20th November 1681. A summary of the contents of the copper plate is given below:

This has been issued by Shrimath Satyadhisha Thirtha, the shishya of Shrimath Satyabhinava· Thirtha on Kartika Bahula Panchami of Durmati Samvatsara, Sh. Sh. 1603 to Shrimath Raghavendra Thirtha, the shishya of Shrimath Upendra Thirtha. “From an early date, i.e. from the time of Vijayendra Thirtha, you have been affiliated to the Kumbhakonam Math. When Yogindra visited Kochi, he did not show the same respect, which Vijayendra, Sudhindra and Raghavendra (his predecessors) showed to your predecessors (Yadavendra, Upendra etc.) As a result, a dispute arose between you and Yogindra. At the same time you came to know that our Guru (Satyabhinava Thirtha) was on a pilgrimage to Anantashayana, and sent one Karkala Ananta Bhat to him with a message (concerning the dispute between Shree Kashi Math Samsthan and Shri Kumbhakonam Math). Our Guru sent a Rayasam through Venkata Bhat promising you recognition by us. Later, you came with Konkan Brahmanas (Goud Sarasvata Brahmanas) to see our Guru in Trenamal and told that you had snapped ties with Yogindra Vader and that they had come to join him since he was the head of the original Math (Shri Uttaradi Math). Now we have been sent here by our Guru to perform mudradharana, and instructing mantras to Konkan Brahmanas, residents of Sasashti, Anthroji, Bhatkal, Basrur, Kochi etc., as per your wishes. We did so in all these places as ordered by our Guru, who had presented to you pallakki, chhatra, surepan, chamara etc., (paraphernalia, similar to the ones used in Shri Uttaradi Math). In the future also we will perform mantra mudradharana on your community members. As you have been doing in the past, do continue to perform mantra mudradharana on your community members. If both of us are in the same place, we will perform mudradharana on you, and you will do so on others. We will continue to show the same respect to you as shown by our Guru. If any dispute arises, we undertake to settle it. Let our heirs and your heirs follow this tradition”.

This copper plate of 1681 conclusively proves that Shrimath Raghavendra Thirtha was the Shishya-Swami of Shrimath Upendra Thirtha. It also proves that since about the same time (or some time earlier) the Swamijis of Shree Kashi Math Samsthan and Shri Uttaradi Math had the joint authority over the Vaishnava Goud Saraswata Brahmanas residing in the region from Sasashti in Goa to Kochi. This authority was to be exercised by way of imprinting mudras on the body of the followers and instructing them certain mantras.

Document Nos. 2 and 7 describe a plot of land with structures in the Brahma Ghat in Banaras (Fig.9) as follows: 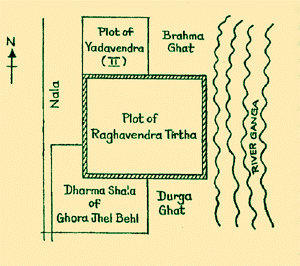 This was bought by Shrimath Upendra Thirtha (as per Document No.8, referred to earlier) from Jagadisha Rawat for Rs. 515. There was an old structure, which was demolished and a new one erected by the Swamiji. After his death, his nephew Narayana Bhat alias Raghavendra Thirtha appeared before the court of Mohammadabad (Banaras) presided over by Mohammad Murad Badshah, Kazi Inayatulla and others on 28th Rajab, 1087 A.H. (Tuesday, 26th September 1676) and declared that he was in the sole possession of the said plot and the structures thereon. This was confirmed under oath by two witnesses – Narasinga Bhat (son of Bishan Bhat, son of Kishan Bhat) of the Durga Ghat and Kesar Bhat (son of Keshava Bhat, son of Ananta Bhat) of Brahma Ghat. Rama Bhat, the donor’s nephew was also present in the court and he too confirmed that Upendra Thirtha had given possession of the said plot with structures thereon to Raghavendra Thirtha.

Raghavendra Thirtha is described in the documents as one of 35 years, with a wheat complexion, wide eyes and wide eyebrows and wearing black moustaches and black beard. He had a scar on the side of right cheek and had black moles on the face. His ears were punched (for wearing ear rings).

Document No.5, dated 25th Jilhaz 1091 A.H. (Thursday, 6th January 1681) gives the same information as in Document Nos. 2 and 7 except that the former was issued about five years earlier and that Bhagirathi’s husband’s name is given as Vallabha Bhat instead of Billyeth Bhat. Vallabha Bhat seems to be correct and the other name might be a mistake of translators (Persian to Kannada).

Document No. 29 is dated 22ml Rajab, 11/6 A.H. corresponding to Thursday, 9th November 1704, when Raghavendra Thirtha with an estimated age of 55 years appears before the 13anaras court of Kazi Shaikh Asadulla and Sayyad Fajiulla. The Swamiji is described as of wheat complexion, with ears punched and wide brows and eyes, wide forehead, with white moustaches and beard. He solemnly declared that he was donating the following articles to his brother’s son, Narayana Bhat (brother being Ananta Bhat) –
(1) 70 utensils including thalis, lotas, etc.
(2) A white woollen shawl.
(3) A yellow woollen shawl. (5 x 3 ‘Mola’ units; each Mola unit being equal to the length between his elbow joint to the tip of the small finger)
(4) Two bound books (400 and 300 pages).