Shrimath Rajendra Thirtha became the eleventh Swamiji of Shree Kashi Math Samsthan after Shrimath Upendra (II) Thirtha passed away in 1791 in Banaras. He was a great scholar in Vedanta. It was during his tenure as the head of Shree Kashi Math Samsthan that the Math Bhavan was built in Prayag (Allahabad). He bought some more land in this sacred city for the Math expansion. The relevant sale deed (Document No. 16) is dated 8th Rabiul-ul-assani 1200 A.H. corresponding to Wednesday, 8th Feb., 1786 and was registered in the Allahabad Court of Kazi Mohammad. Unlike other documents, which mention the names of the father and grandfather of Swamijis, this document states the pontifical lineage: Rajendra Thirtha, Shishya of Upendra Thirtha, Shishya of Madhavendra Thirtha. (This sequence is of importance to decide certain issues of the pontifical lineage of Shree Kashi Math Samsthan. According to Shri H. Laxminarayan Kamath, Shrimath Upendra (II) Thirtha was the shishya of Shrimath Yadavendra (III) Thirtha. The present author had accepted this version in his Kannada book on Shree Kashi Math Samsthan. However, Shrimath Yadavendra (III) Thirtha had predeceased Shrimath Madhavendra Thirtha, his Guru and it is unlikely that a Shishya-Swami took another Shishya, when his Guru was still alive. Now that Document No. 16 gives unambiguously the pontifical lineage, Shrimath Upendra Thirtha can be considered as the shishya of Shrimath Madhavendra Thirtha and not Shrimath Yadavendra (III) Thirtha).

The document concerns a plot of land with a structure in Daraganj owned by one Fazal Ali Khan, son of Mohammad Salha Khan, son of Nawab Sale Khan of Allahabad. This was surrounded on the four sides as shown in Fig. 11.

The said plot with the structures thereon was sold to Rajendra Thirtha for Rs.175 (the Half of which is Rs. 87-8-0). The amount and the relevant records were exchanged by the buyer and the seller in the presence of respectable people in the court. 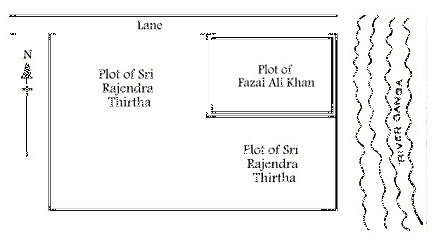 Document No. 14 is the official receipt for the above amount and states as follows:

I, Fazal Ali Khan, son of Mohammad Salha Khan, son of Nawab Sale Khan of the administrative town of Allahabad solemnly declare that I have received Rs.175. half of which is Rs. 87-8-0, from Rajendra Thirtha, a sanyasi of Banaras, the full amount being the sale price of my plot with structures thereon situated in Badkhan in Daraganj Taluk of Allahabad. I have no further claims from the said Rajendra Thirtha regarding this sale. I am giving this as the official receipt, which may be used at any time. Dated 8th Rabiulassani 1200 (8th February 1786). Witness Sd/- (Kohari Panda) Sd/- (Fazal Ali Khan)

Document No.1 issued under the seals of Pir Mohammad Gulam Mohammad, Kotwal of Daraganj (alias Kushalganj). Mir Imam Ali Husani Bukhari and Khan Ramzan Ali on 7th Rabilussani 1200 A.H. (corresponding to Tuesday, 7th February 1786). This is a mortgage deed in which one Karimunnisa, daughter of …. Baig (the name is illegible) and wife of Mohammadi Baig, a servant in the house of Nawab ….. (name is illegible) mortgaged a property owned by her (described in Fig. 12) to Konkan sanyasi Rajendra Thirtha, shishya of Upendra Thirtha (II), shishya of Madhavendra Thirtha for Rs.50.

Fig. 12. Plot mortgaged by Mrs. Karimunnisa in Prayag (Document No.1)

There was a structure with two rooms with roofs covered with straw (see Fig. No.12). She further stated that Rajendra Thirtha may, if he so desired, demolish the structure and reconstruct another building with or without a tiled roof, and that if she wished to take possession of the mortgaged land in the future, she would have to defray all the expenses incurred in connection with the construction of the new building along with the mortgage amount of Rs.50 in order to take possession of the said property. She had signed the document in Persian Language; witness also signed.